The Wells (Albany) library was originally founded in 1866 when Henry Wells, an Albany merchant, left money for a local library in his will. It joined the county’s system in the mid 1970s but stuck with its original name to honor its history.

The new library building was struck by fire in 2008, and services temporarily relocated to the Albany Community Building. The library at its current location reopened in April, 2009.

One of the unique features of this location is its Mary Young Garden, named after a former branch manager. 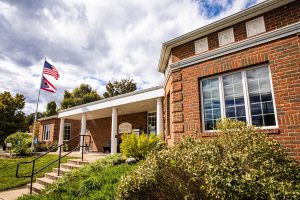