Koha’s OPAC has a feature which lets logged-in users leave comments about records in your catalog. This feature was originally branded as “Reviews,” but was changed to “Comments” in order to align it with the familiar feature allowing users to comment on content in blogs, on YouTube, etc. If you haven’t seen it before, here’s what it looks like to a logged-in user: 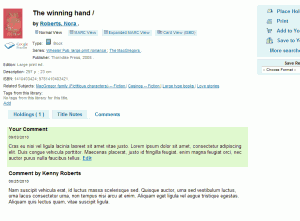 A catalog record with comments

If you visit the Athens County Public Library catalog you’ll find that comments are enabled, but few users have taken advantage of the feature. I’ve often wondered what we could do to encourage people to add their comments, and one of the ideas I had was to feature recent comments–perhaps on the OPAC or library web site home page.

I’m not an experienced Perl programmer. Most of the changes I make to Koha’s Perl code are minor or cut-and-paste. Adding a feature as unformed as a recent comments view was a little daunting, but I think it turned out well, and I hope I did it right! I’m quite pleased with the result: 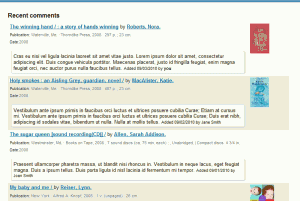 The page shows the latest comments added to any title in the catalog in descending order by date. The page also offers an RSS feed of recent comments. This offers two benefits: First, patron can subscribe to recent comments if they want to find out what others are talking about; and second, the library can use that feed to pull content into their own web site. If my library site’s content management system can process an RSS feed, I can add those recent comments on my library’s web site too.

Of course it’s too late in the development cycle for this feature to make it into 3.2, but I hope it will arrive with 3.4.

There’s one more thing I wanted to share about the development of this little feature: When I was creating the RSS feed I was testing it with the W3C’s feed validator to make sure I had constructed the markup for the feed correctly. The only error I didn’t know how to fix was one with date-formatting. The validator told me I needed to  format my date according to RFC 822, but Koha didn’t include a way to format dates that way. I put out a plea on the Koha IRC channel which was answered by Chris Nighswonger. He very generously added the code I needed and I was able to include a valid RSS feed.

This anecdote shows the very best kind of interaction possible when you work with an open community of developers. I’m not suggesting that in the Koha world all one has to do is ask and free code will be provided. But sometimes you catch someone at the right moment, or the challenge appeals to them, and they pitch in. Many thanks to Chris for doing so when I needed help.