There’s another project I’ve been working on for almost as long as I haven’t posted to this blog: Incorporating the jQueryUI JavaScript library into Koha. This change would replace the YUI Library which currently powers such interface widgets as buttons, menus, and autocomplete.

When I helped develop the new templates for Koha 3.0 I evaluated several different options for creating some application-like interactions in the Koha staff client including YUI , Ext JS, and similar jQuery plugins. The goal was to have options for creating cross-platform, cross-browser interface widgets. After much testing I settled on YUI. Though I found its syntax difficult to work with, the results worked well and seemed robust. The most visible example of YUI is in the staff client interface, where “toolbars” appear on most pages for displaying actions:

YUI also drives some autocomplete form fields in the staff client and menus in the OPAC.

In addition to YUI, Koha uses the jQuery JavaScript library and some jQuery plugins like Tablesorter and a pre-jQueryUI version of  Tabs. Since the release of Koha 3.0 over three years ago a lot has changed with these projects. The YUI library released version 3 with enough syntax changes to make an upgrade mean totally rewriting our existing YUI code. At the same time the jQueryUI library made great advances, adding a lot of the same functionality for which we depended on the YUI library.

In November 2010 BibLibre founder and CEO Paul Poulain proposed getting rid of YUI in favor of jQueryUI and the response on the Koha developer’s list was positive. Shortly after I filed a bug, Replace YUI JS libraries with Jquery UI and began working on a branch to do just that.

Since then I’ve gotten two major components migrated from YUI to jQueryUI: tabs and autocomplete. Here’s an example of jQueryUI tabs in the OPAC:

Here are the search tabs in the staff client:

And here’s autocomplete in action in the staff client:

As part of this project I have also replaced the calendar widget we have been using with Koha. Since that widget was added to Koha it stopped being open source, so it makes sense to abandon it in favor of functionality built into jQueryUI. 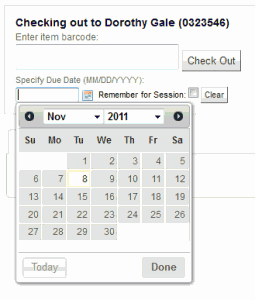 Calendar pop-up on the check-out screen

Also on my list of things to implement is a replacement of the modal window system used in some places in Koha, for which we’re currently using a standalone JS plugin. This can be eliminated in favor of the jQueryUI-native Dialog widget.

Unfortunately we are still waiting for one element for which we depend on YUI which jQueryUI lacks: A menu widget. Their menu widget has been in alpha stage for almost as long as I’ve been working on this jQueryUI branch. Without it we can’t reproduce the toolbars we build now in YUI. For this reason my work has been stalled for a while. I’m keeping my branch up to date and in sync with the master branch, and I’m keeping my eye on the status of the menu widget.

I’m frustrated with the wait, but I’m also excited about the improvements we’ll be able to make to the Koha interface once jQueryUI is our standard go-to library.

1 thought on “jQueryUI and Koha”