It’s been almost three years since I wrote Colorizing the Cart and Lists buttons. My conclusion then was that we needed a fairly complex combination of markup, CSS, and background images to create the appearance of the buttons.

This works fairly well in Firefox, Safari, and Chrome. Unfortunately, it fails not only in Internet Explorer 6, 7, and 8, but all versions of Opera too. For the time being, our more-complex process gives the desired result to a wider audience.

The time has come for the simpler version. My patch for Koha bug 7584, “Update cart and lists buttons style using CSS3 features” has just appeared in Koha’s master branch, the development version which precedes an official release.

What has changed? Firefox, Safari, and Chrome have had updates since then, which has at the very least expanded the number of users of those browsers who are on a more recent version. Opera, one of the holdbacks in 2009, now supports the features required. Internet Explorer 6, 7, and 8 still linger of course, but Internet Explorer 9 is available now. IE9 offers better support for the features we need.

For me what has changed is that I now think that Koha should be a little more aggressive about taking advantage of the features of up to date browsers even if that means the experience isn’t the same for users of older browsers.

Let’s take a look at the revised markup. Where the previous version needed a lot of extra elements (<i>, <span>, etc) the new version doesn’t:

I’ll quote the relevant declarations from the CSS. First, both buttons are assigned rounded corners:

The values are applied clockwise starting with the upper left-hand corner.

The other primary aspect of the buttons are their background colors. Previously we used a transparent image to give the button background a gradient. With CSS3 we can specify the gradient values right in our CSS. The easiest way to accomplish this is using the Ultimate CSS Gradient Generator. 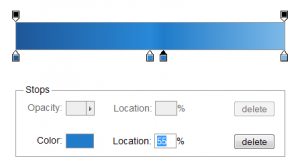 With the CSS Gradient Generator you can use the visual tools for creating a gradient and the CSS will be generated for you. It generates CSS declarations specific to several major browser versions including Internet Explorer. There is even an option to upload a gradient image and have the Generator automatically match the colors.

Here’s the gradient CSS for the Cart button:

Eight lines of CSS each doing the same thing for different browsers, starting with a solid background color for browsers which don’t support CSS3. This is the same kind of code which will be generated by the CSS Gradient Generator with one exception: The OPAC CSS also includes a background image for the Cart button in order to display the little cart icon.

There’s more to the styling of the buttons than rounded corners and background-gradients, but nothing which we haven’t seen before. Fire up Firebug (or your favorite browser’s DOM inspection tool) and inspect the buttons for more information.

What have we gained?

Just looking at the HTML markup it would seem we’ve gained a lot of efficiency over the <span>-heavy buttons in the older version. But the multiple lines of CSS more than make up for it. What advantages does the new design offer? Importantly, flexibility. We don’t have to create custom-colored 24-bit transparent images when changing the background color of the search bar. We can make all our changes, including changes to the Cart icon, right in the CSS. Border color, border radius, background-color (or gradient), it’s now 100% CSS and can be affected by a custom stylesheet or by changes to the OPACUserCSS system preference.

This change is going to require some revisions if your library has existing CSS customizations to these areas of the OPAC, but I think going forward these changes are going to prove to be beneficial to those seeking to customize their OPAC’s appearance.